Samy Rio studied cabinet making for four years before attending the National School of Industrial Design (Ensci) in Paris, where he completed a five-year course in industrial design.

This dual background allows him to combine industrial and artisan techniques, which he sees as complementary and indispensable to each other. In October 2014, he graduated with distinction from Ensci-Les Ateliers for his research into the use of bamboo tubes for industrial applications. In July 2015, he opens his studio after winning top prize at the Villa Noailles Design Parade 10.

As a result of that award, he was invited as an artist-in-residence at the International Centre for Research on Glass and Visual Arts (CIRVA) in Marseille and at the Cité de la Céramique in Sèvres. He also began a collaboration with the galerie kreo, since he also has completed a residency at the National Taiwan Craft Research and Development Institute (NTCRI), also at the Villa Kujoyama in Kyoto and started collaborating with Atelier Luma.

At each residency and new project he pursued his experimental work on different materials, allowing him to further explore the connections between time-honoured craftsmanship and modern industry, traditional methods and new tools, constantly challenging both the way we produce objects and the objects themselves. 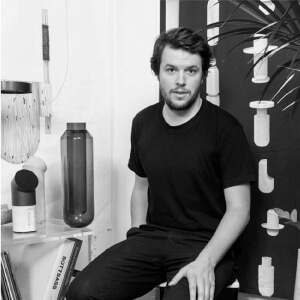